My Take on Disney's Maleficent 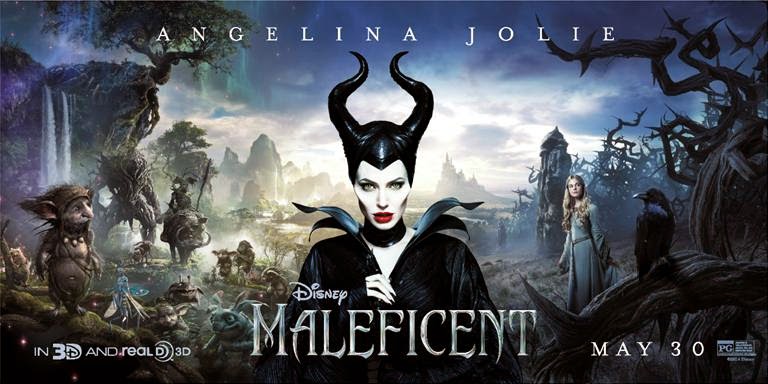 Last night I attended an early screening of Disney's Maleficent. I was very excited about the movie since attending the Disney Social Media Moms Celebration earlier this year. During the conference, which was held at the Disneyland Resort, producer Don Hahn spent time with us to share information about the upcoming movie. We had a special sneak peek at an extended trailer.  We got such an early look at it that were were instructed not to share what we saw with our social networks. THAT was not an easy task!

Hahn also introduced us to Elle Fanning who plays Princess Aurora. She just had her 16th birthday and we got to celebrate by singing Happy Birthday to the young star. After she blew out her candles we all had cupcakes! A future post about that in in the works. Back to the movie...

“Maleficent,” the untold story of Disney’s most iconic villain from the classic “Sleeping Beauty,” reveals the events that hardened Maleficent’s heart and drove her to curse the baby, Aurora, only to later realize that the child may hold the key to peace in the land.

The movie is rated PG and had a good share of action scenes, violence, and scary images. Young children may not be ready for this.

I don't want to share too much - no spoiler alerts here! The movie was fantastic! I love the unexpected! The characters are so much fun to watch. The story is awesome! We can chat more about it once you see it! My husband enjoyed it as well. He didn't expect to see so much action! In fact there is a lot of action scenes. The movie has it all. I enjoyed the beautiful imagery, the story, the drama, a bit of comedy, and the talented actors. I thought the movie was well narrated and I definitely plan on seeing it again.  Once available, I'm adding the movie to my wish list!

Have you ever watched a movie trailer and all the best scenes are there? For me, many times I am wowed by the trailer and once I see the movie: the rest falls flat. Well NOT at all with this movie! I was not disappointed, the entire production was even better than I expected.  And I had some pretty high expectations. So go see the movie so we can chat all about the details! In theaters Friday May 30.

Here is a bit that I can share without giving away too much:

Sharlto Copley as King Stefan: I enjoyed not liking him!

Sam Riley, who plays Maleficent’s loyal servant Diaval - was an easy favorite character for me, I didn't expect him but easily adored his role.

They young Maleficent played by Ella Purnell was a treat to watch.

Did you know that the child actress as the very young Aurora is Brad and Angelina's daughter? I loved their scene together!


Disclosure:  I was invited to a free media screening of Maleficent. I am not obligated to write a post but wanted to share my love of the movie. Maleficent, both a Hero and a Villain. Brilliant!
Labels: Disney Entertainment