We have a little boy that loves dinosaurs. I have lost count on how many dinosaur toys and books that he owns. We have watched our fair share of dinosaur movies and television shows. I know so much dino trivia at this point! I was thrilled when a dinosaur show came to town and I am grateful for father and son time. That special time is great for the boys to bond and create memories. Not to mention the little bonus that I get with a bit of down time to myself. Sometimes I do get a little jealous of their fun but I encourage their special adventures. Father and son spending one on one is priceless. I hope to share more of their adventures on the blog. I really love the retelling of the day by son. His expressions are priceless and the happiness that just pours out of him makes me smile. I love that he is excited to tell me all about it. It doesn't hurt that his daddy is a videographer/photographer/editor, we get a highlight reel of all the fun times!

One of their father and son trips took them to T Rex Planet. T. REX Planet is a North American traveling Dinosaur show. The show made it's way to San Diego on January 14 - 15, 2017. We saw the television commercials and my son could not contain his excitement. He wanted to make sure that his daddy knew that he wanted to go. His hero came through and got tickets. They attended the show that was held at the Del Mar Fairgrounds Exhibit Hall. It was a hit. 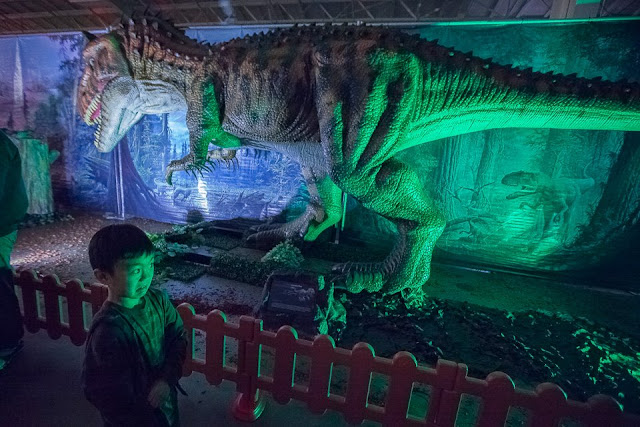 He described it as AWESOME, THE BEST, COOL... Yes, all caps!

The cost of the event was $25 for kids and $20 for adults. Parking $13. Discounts are available for military families and senior citizens.

This event simulates what it would be like to experience the Jurassic, Triassic, and Cretaceous periods first hand. According to my son, the dinosaurs looked real. He said that it wasn't scary for him (he is six years old). He did say that younger kids may be frightened and that he did see a little one cry because they were scared.

There were items for sale so we did end up adding to the collection at home. If you have a dino loving kid this show is for them!